The  malagasy coton's history in the USA

the Coton de Tulear arrives in the USA directly from madagascar

the FCI Coton de tulear arrives in USA via france

As the exodus of people leaving Madagascar (occurring in the 1970's) the direction of the breed became divided.  The Malagasy people bred Cotons of various sizes, they were primarily white with occasional splashes of color, that faded in intensity as the dog aged, no official pedigree records were kept.

In 1968, in Madagascar, three men gathered to create a breed standard they hoped the FCI would accept and recognize.  They based this standard on one of their own dogs.  These men eventually left Madagascar, they renewed their efforts in France to establish a breed standard for the Coton de Tulear.  They felt the breed they took from Madagascar needed to be "fixed" and improved. To achieve this, some early breeders introduced other white breeds, to create what is today known as the Coton de Tulear.  (Breeds are created by mixing breeds together, to produce something different, and unique from other breeds.)

In 1971, the French were successful, and the Coton de Tulear gained full FCI recognition. The French made revisions to the FCI breed standard; they eliminated most color, and decreased the size.  Not all Europeans were in agreement with this revision, knowing the Coton de Tulear was not a toy breed, and was not a "white only" breed, and shouldn't be represented as such.

history of the malagasy coton de tulear in the usa

In 1974, Robert Jay Russell created the CTCA breed standard for the Coton de Tulear.  His standard was written to represent ALL the Malagasy Cotons de Tulear he witnessed living on the island, and being bred by the Malagasy people.

Two years later, in 1976, Robert Jay Russell created the Coton de Tulear Club of America (CTCA).  This breed club maintained the CTCA breed standard, stud book, pedigrees and registrations.  The CTCA standard was broader than the FCI standard in color and size allowances.  Breeders in North America began building their breeding programs by acquiring Cotons from Madagascar and from Europe, all were registered with the CTCA, at that time the only Coton de Tulear breed club in the United States. The CTCA accepted all Cotons from around the world into their registry.

The charts below show the number of Cotons registered with the CTCA, by their kennel and country they were born in.  All of these kennels, from around the world, contributed to the CTCA gene pool. The first chart's data is from the first edition of "The Official Coton de Tulear Book", written by Dr. Robert Jay Russell, showing a total of 470 Cotons registered. The second chart is data through 1999 that was printed in the second edition of Dr. Russell's book, published in 2002, this chart shows 998 Cotons registered.  The number of Cotons that arrived in the USA from Madagascar and registered with the CTCA appear to be 18 total. 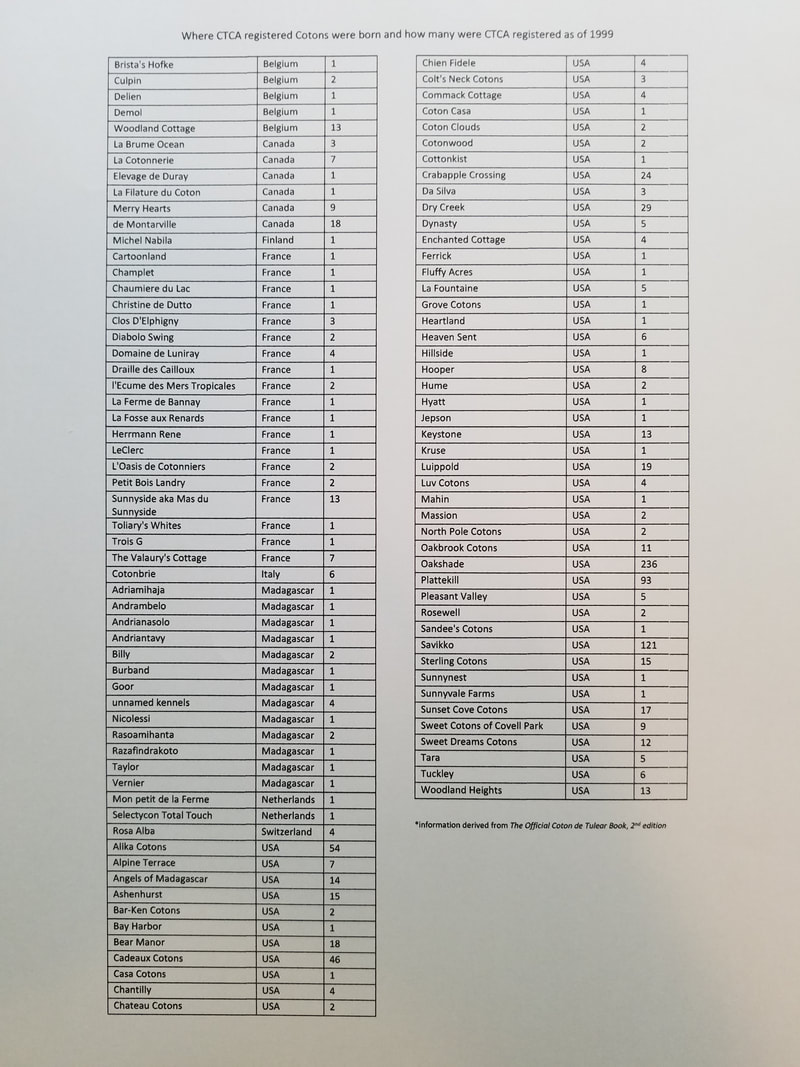 As you can see, the CTCA registered Cotons are from all over the world, the CTCA gene pool is a mix of Cotons imported from Europe and Cotons imported directly from Madagascar to the United States.
​
A Malagasy Coton de Tulear are those Cotons bred to the CTCA breed standard AND whose ancestors can be traced back to the founder dogs from the kennels listed above.

A European Coton is a Coton de Tulear bred to the FCI standard. The population of the Malagasy Coton in the USA has been tightly controlled, and is very small, compared to the FCI bred population.

​In summary, there are two basic breed standards, or varieties, that have been developed over time, and yet they are still one breed.  This is an important part of our history that needs to be understood, and by mapping the DNA of our breed we can now see the shared relationships between the two varieties.
​From 1994-2004, the Coton de Tulear in North America experienced strife and discord among breeders; the dog show world vs the CTCA.  New Coton breed clubs started forming. Some of these include:


Over the years, breeders have left the CTCA for a variety of reasons; changes to the Code of Ethics (COE), changes to the CTCA breed standard, increase in registration fees, poor service, and/or a difference of opinion regarding the future of the breed. Some of these milestones that caused breeders to leave the CTCA, and the years they occurred, are listed below:

​Today more breeders, of all breeds, are realizing the damage of closed stud books, and the even more damaging effect, of closed breed clubs within one breed; where members are not allowed to breed outside their club's membership.  The only outcome possible, of a closed breed club, is the rise of inbreeding, which increases genetic diseases, and will quickly destroy a breed.  MCPC breeders are aware of this, and choose to be an open breed club, allowing members choices, and to produce litters with the lowest risk of genetic diseases.
With new advances in canine genetic research, the MCPC has chosen to partner with Embark Veterinary, to provide DNA genotyping and analysis for all our breeding dogs.  At recent count, MCPC breeders have Embark tested over 200 Malagasy Cotons de Tulear.

The MCPC also works with the Institute of Canine Biology (ICB) in providing our board and our breeders with further education in canine genetics.
​
​These new advances in technology that Embark Veterinary and ICB are utilizing, will help breeders make better matchmaking choices based on a coefficient of inbreeding that measures the level of homozygosity on each chromosome and comparing the relatedness of breeding pairs.

Working with all breeders that share traceable lineage from Madagascar, and using DNA analysis, will allow us to make breeding decisions that will help save genes and not lose more genetic diversity.
​
​To learn more about Embark Veterinary, Inc visit:  embarkvet.com/our-story
​To learn more about the Institute of Canine Biology visit:   www.instituteofcaninebiology.org